The representatives of the NDRM-CARIFORUM participated in the sixth edition of the Regional Platform for the reduction of natural risks in the Americas, held in Colombia.

The VI Regional Platform for the reduction of natural risks in the Americas was held in Cartagena de Indias, Colombia, between June 20th and 22nd of 2018. This sixth edition brought together government agencies, representatives of the private sector, and members of civil society from the different states of the Americas and the Caribbean to exchange experiences and learnings in the field of natural disaster risk management and the strengthening of resilience in the countries and communities of the region.

The event was inaugurated with a speech by the President of the Republic of Colombia, Juan Manuel Santos, Nobel Peace Prize, who highlighted the importance of building a shared strategy that allows all the States of the Americas and the Caribbean to reduce the vulnerability of communities and minimize the risks and consequences of disasters. President Santos also called on all American and Caribbean nations to promote resilience and be prepared for the impact that disasters and the effects of climate change can cause.

The sixth edition of the Regional Platform for Natural Hazard Reduction in the Americas also included the participation of the representatives of the Natural Disaster Risk Management Program in the CARIFORUM countries (NDRM - CARIFORUM). This initiative of the African, Caribbean and Pacific States (Intra ACP), funded by the European Union (EU), aims to contribute to the reduction of vulnerability to the impacts caused by natural and man-induced hazards and the effects of climate change in the communities of the CARIFORUM member countries. 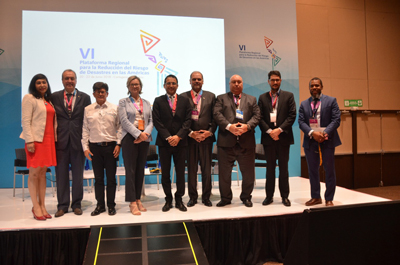 On this opportunity, the NDRM-CARIFORUM was represented by the implementing partners of the Program: the Caribbean Disaster Emergency Management Agency (CDEMA), the Caribbean Development Bank (CDB) and the Government of Dominican Republic, who took the opportunity to exchange good practices and experiences learned in terms of training and strengthening resilience in the face of disasters in the different communities of the Caribbean countries.

The Delegation of the Government of the Dominican Republic was headed by Colonel José Alcántara National Deputy Director of the Civil Defense of the Dominican Republic, who participated as a panelist during this VI Platform, stressed that disasters know no borders and therefore justifies the design of a common management strategy and policy of risks that allow for strengthening the resilience of the people.

The sixth platform was also attended by the Ambassador of the European Union in Colombia, Ms. Doña Patricia Llombart, who emphasized the importance of these types of meetings to "know which are the priorities of the region and strengthen multilateral action on issues of preparation for disasters”. Also, within the framework of this event, the European Union held a two-day workshop with regional experts to define the priorities that will guide cooperation in disaster risk management in Latin America and the Caribbean by 2019. The workshop was organized by the European Commission, (ECHO) and the United Nations Office for Disaster Risk Reduction (UNISDR).

Representatives of humanitarian organizations from different countries of the region participated in these workshops. Noteworthy is the intervention of Mr. Ronald Jackson, Executive Director of the Caribbean Disaster Emergency Management Agency, who highlighted that the best way to promote functional cooperation among the different regional actors is based on the principles of solidarity and teamwork. He also referred to the importance of strengthening monitoring and training to improve disaster response mechanisms at the regional, national and local levels.

The Natural Disaster Risk Management Program (NDRM) is an initiative of the group of African, Caribbean and Pacific States (ACP), funded by the European Union (EU). The program supports disaster risk reduction (DRR) and climate change adaptation (CCA) activities in the CARIFORUM countries.

This initiative started in July 2014 and is being implemented by the Agency for Emergency Management and Disasters in the Caribbean (CDEMA), in collaboration with the Caribbean Development Bank (CDB, for its acronym in Spanish). English) and the Government of the Dominican Republic (DR).

The main objective of the Program is to contribute to the reduction of vulnerability to the impacts caused by natural disasters, including the damages related to climate change.
This Program seeks to strengthen the capacities of authorities and other organizations at the national, regional and community levels to carry out coordinated interventions and provide timely responses to the challenges imposed by natural disasters and the effects of climate change.