Message to mark the 27th Anniversary Celebration of CDEMA From Chairman of Council of Minister, Hon. Vaden Delroy Williams

It can be argued that when CDERA (now CDEMA) was formed 27 years ago, terms such as climate change and global warming were mere abstractions to the average person in the Caribbean. Indeed, given that the majority of the Caribbean Islands and CDEMA’s 18 participating states are geographically located within the hurricane belt, the focus at the local and regional level was mainly, and somewhat narrowly, on the direct impact and effects of tropical weather systems in the Atlantic Hurricane Season between the months of June and November.

However, thanks in large to agencies such as CDEMA and through its expanded role, the Caribbean region has proudly made transformational changes in the approach to disasters and disaster management. As part of this paradigm shift, there is now a general acceptance that outside of those six hurricane months that have traditionally occupied our attention in the Caribbean, global warming and climate change are real and serious problems, which pose very clear and significant threats to our environments, our economies and indeed, our daily and future survival. 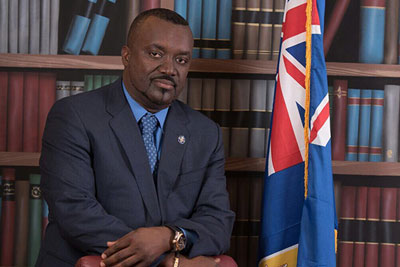 In recent years, we have seen ample evidence that supports the inextricable link between climate change and the economic well-being of Caribbean countries.

In addition to hurricanes, there are other non-seasonal phenomenon such as droughts that have impacted agricultural industries, deadly and devastating earthquakes, flooding and mudslides that have dislocated many, along with rising sea levels, increasing sea surface and air temperatures, and the bleaching of coral reefs.

Climate change is real, and we would be unwise to pretend it doesn’t exist. Added to this global reality, there are various other technological and man-made hazards that the region has experienced over the past 27 years, and in which CDEMA also played a leading role in managing and lending critical assistance.

Indeed, as you read this, the Caribbean is in many ways still experiencing the after-effects of the two back-to-back Hurricanes Irma and Maria, in September 2017, which were among the most powerful ever recorded. Not only were several homes and businesses devastated by those powerful weather systems that stemmed from climate change, but also many tourism-dependent economies, including the Turks and Caicos Islands. The socio-economic and geo-political effects of those hurricanes led to tourists shifting to those Caribbean Islands that were unaffected. The lessons that are being taught by climate change are therefore particularly instructive and far-reaching to all of us in the Caribbean.

Therefore, while CDEMA must be commended for being in the vanguard of sensitizing governments and people of the region about managing and mitigating the effects of disasters, I am convinced that this Agency must intensify its efforts to encourage Caribbean Governments to pay more than lip service to disaster management and climate change and to be more innovative in how they address the accompanying challenges.

In my view, the budgets of all Caribbean countries must make provision for allocating more human and financial resources to address climate change and disaster management, building resilience in the region and to supporting agencies such as CDEMA.

In addition, we in the region must raise the volume of our calls for the more developed countries to honour the letter and spirit of the Paris Agreement. I am satisfied that as CDEMA embarks on the celebration of its next quarter-century, it will be instrumental in ensuring that the Caribbean countries that are party to that Agreement will honour their commitments in practice and in principle.

As chairman of CDEMA Council of Ministers, I would seriously like to see the Agency create and execute more educational programmes and campaigns to ensure that the average Caribbean citizen, especially our young people, can become more engaged in meaningful and constructive dialogue on some of the key issues surrounding climate change.

Let me therefore congratulate CDEMA on attaining this 27th Anniversary milestone and extend best wishes on behalf of my Government, the people of the Turks and Caicos Islands and the all member states for a bright and successful future.