Disaster recovery is an intensive process which requires large inputs of labour, time and financial resources. The Caribbean Disaster Emergency Management Agency (CDEMA) places emphasis on mobilising finances for recovery through an initiative called the “CDEMA Legacy Project”. The aim of the Legacy Project is to improve the physical living conditions of the most vulnerable persons in the most adversely affected areas of the impacted States.

The project is facilitated by the collective contributions of individual, corporate, national, regional and international donors.

“Given the collective contributions of the group of actors who have responded to the incidents, there were resources remaining at the end of the disaster response phase. In this situation we seek to leave something with our member states in support of their early recovery efforts”, said Ronald Jackson, Executive Director of CDEMA. “The remaining resources are therefore reallocated to aid the reconstruction and rehabilitation of critical infrastructure as well as providing necessities for affected populations”, Jackson stated.

Since the inception of the initiative, CDEMA Participating States (PS) impacted by hazards have benefitted from the investment of funds through CDEMA on behalf of donors. Jackson pointed out, “In the past, where we responded to the Haiti earthquake in 2010, we did some work in repairing health and other facilities using funds we garnered”. Assistance was also provided to Haiti in 2016 post Hurricane Matthew with the rehabilitation of two schools, one each in Jeremie and Les Cay. Other countries which have benefitted from the Legacy Projects include Antigua & Barbuda, the Turks & Caicos (TCI), the British Virgin Islands (BVI) and Dominica following the recent impacts of Hurricanes Irma and Maria in 2017. 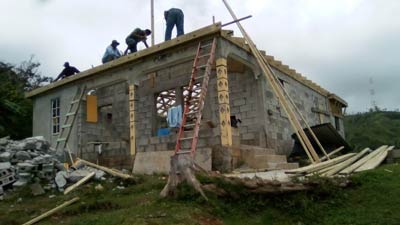 Antigua & Barbuda received a donation of USD $ 50,000 to provide food vouchers in support of the most vulnerable displaced families from Barbuda following the impact of Hurricane Irma. The Autism Centre and the Long Trench Community Centre in the BVI were rehabilitated through the donation of USD $70,000. Another USD $ 70,000 was donated to the TCI to assist in the development of the Education Management Information System (EMIS) post Irma through the contribution of 88 computers to the Ministry of Education.

In Dominica, the project targeted the indigenous population (Kalinago), specifically through support for minor repairs and re-roofing of houses within the Kalinago Territory, which were amongst the most severely damaged.  The intervention targets 1000 families through the support of the Government of Canada in the amount of CAD $150,000.

According to Jackson, the Legacy Projects have been sustained by the generous donations by international donors such as Canada, the Republic of South Africa, the United Arab Emirates, the public and private sectors. In addition, there has been continuous support from CARICOM Governments, individuals and non-governmental organisations (NGOs) such as the Barbados Community Foundation, which most recently contributed funds for the repair of four (4) health centres in Dominica to assist in returning them to full operation.

The current and future intentions of the Legacy Projects will revolve around improving resilience to all hazards rather than just focusing on climate-related hazards like hurricanes and flooding. This is particularly important considering that the region is vulnerable to seismic hazards even though Participating States are not frequently impacted by earthquakes.

“If you were to talk to the Seismic Research Centre, you would note that there are upwards of 250 to 300 tremors being experienced in the Caribbean region”, Jackson reiterated while reflecting on the earthquake which impacted the region on August 21, 2018. He further noted that the Seismic event should serve as a reminder that we do not only encounter climate and weather generated hazards. The Comprehensive Disaster Management (CDM) Strategy considers all hazards and gives consideration to all groups which can be affected.

“Given the current state of exposure and vulnerability in the region, we must out of necessity also focus on environmental protection, the integration of adaptive technologies and building codes among other priority areas for action in implementing the agenda for resilience. Furthermore, we must also promote initiatives that will focus on safeguarding vulnerable populations”, noted Jackson.

“If we do not have modern social protection vehicles in our countries, the poor are going to be impacted, incurring costs to governments both in terms of responding to their needs and their inability to contribute to economic development”, he concluded.