Deputy Director General of the Office of Disaster Preparedness and Emergency Management (ODPEM) Richard Thompson has said that Jamaica should benefit from its End-to-End Supply Chain Management workshop.

Thompson said that the main focus of the four-day workshop, which ended yesterday, is around disaster relief chain management. 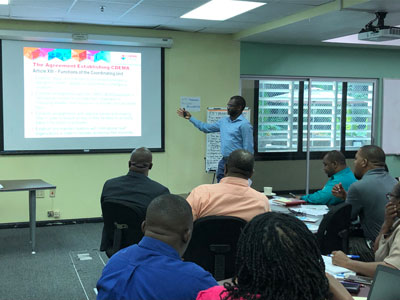 Read more: Experts of the Caribbean call to acknowledge and broaden contributions of older persons to...

Kingston, Jamaica, December 4th, 2012, (ODPEM) - The 7th Annual Caribbean Conference of Comprehensive Disaster Management will be streamed live from the Hilton Rose Hall , Montego Bay , Jamaica.    Join us at http://www.thestreamingguys.com/odpem or http://www.ustream.tv/embed/5861007?v=3&amp;wmode=direct from 8.30 a.m on Tuesday, December 4, 2012 for the following sessions.

He noted that the Caribbean region is considered to be the second most disaster prone in the world, and revealed that for Jamaica alone, it is conservatively estimated that for the past 10 years, the country has lost $14 billion annually, dealing with damage caused by impact of hazards, such as hurricane and floods.
Read more: Region must place high priority on Disaster Management - Arscott

Caricom prepares for the recovery phase in Haiti

EMERGENCY response teams from the Caribbean Community (Caricom) attended to more than 3,000 people injured in Haiti's devastating earthquake, and have vowed to provide more assistance after March 5 when the recovery phase begins.

Read more: Caricom prepares for the recovery phase in Haiti