NEMO Declares ALL CLEAR for the country

Belmopan City, Belize, August 4th, 2016 (NEMO) - At 9:00 a.m. (11:00 a.m. EST) NEMO has declared the ALL CLEAR phase for the country of Belize. At that the center of now Tropical Storm Earl was located near latitude 17.2 North, longitude 89.9 West or about 50 miles west of Belize City. Earl continues to weaken as it tracks westward away from Belize.

Read more: NEMO Declares ALL CLEAR for the country 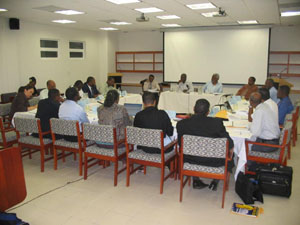 The Directors of CDERA expressed their support for the various initiatives that were accomplished over the last year including training for over a thousand emergency personnel, 70 national/regional disaster workshops, and the delivery of emergency search and rescue equipment and tools to various disaster offices throughout the Caribbean.

During their deliberations, the Directors approved revised plans for Damage and Needs Assessment (DANA), Relief Policies and Search and Rescue. These plans were revised based on the lessons learnt and identified from recent regional and international events. The DANA policy and program protocols are being considered as models for adoption by disaster managers in Latin America.

The Board considerations for the Cricket World Cup 2007 (CWC) also identified critical resource gaps to be addressed to complete the intense process in a timely and efficient manner. This special report will be presented to the Ad-Hoc Committee of Ministers of National Security to be held next week in Barbados.

Belmopan, Belize, October 29, 2008 (National Emergency Management Organisation) - BELIZE RURAL: The Belize Rural District Emergency Coordinator reports that flood waters continue to rise rapidly in the Belize River Valley Area. Not only are the people in the BELRIV area feeling the effects of the flooding, but the livestock population as well. Today members of the Emergency Committee and volunteers continue to transfer herds of cattle from May Pen Village to Grace Bank. The Burrell Boom road leading from the Northern Highway remains closed to vehicular traffic. Burrell Boom can be accessed only through the Hattieville area.