MESSAGE: Hurricane Maria becomes an extremely dangerous category 4 hurricane as it directly impacts Dominica during the next few hours.

Hurricane Maria, the 15th named storm of the 2017 Tropical Atlantic Hurricane Season, is now a dangerous category 4 hurricane. According to the National Hurricane Center in Miami, Florida, as at 5:00 pm (AST), Monday September 18, 2017, Maria was located 15.1N and 60.7W, about 45 miles east-southeast of Dominica and 35 miles northeast of Martinique.

It has maximum sustained winds of 130 mph with a minimum central pressure of 950 mb. Maria is moving toward the west-northwest near 9 mph (15 km/h), and this general motion is expected to continue through Wednesday.

On the forecast track, the center of Maria will move near Dominica and the adjacent Leeward Islands during the next few hours, over the extreme northeastern Caribbean Sea the remainder of tonight and Tuesday, and approach Puerto Rico and the Virgin Islands Tuesday night and Wednesday. 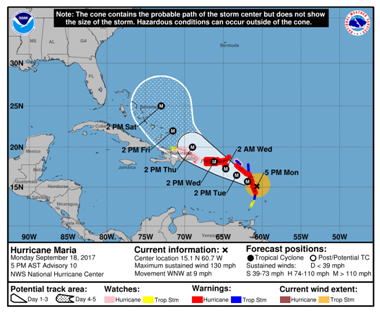 SUMMARY OF WARNINGS AND WATCHES IN EFFECT:

A Hurricane Warning is in effect for...

A Tropical Storm Warning is in effect for...

A Hurricane Watch is in effect for...

A Tropical Storm Watch is in effect for...

The Caribbean Institute for Meteorology and Hydrology (CIMH) provided a briefing for Regional Response Mechanism partners today at 1:00PM today, Monday September 18, 2017. CIMH models suggest that the system will produce rainfall of up to 12 inches with maximum rainfall of 350-400mm in Dominica. Southern Dominica, specifically the southeastern areas should expect heavy rain and wind impacts.

FLOOD/LANDSLIDES: Flood producing rains have already been experienced in Barbados. Such rainfall amounts are likely to increase and lead to life threatening flash flooding, dangerous river conditions and debris flows especially due to already blocked waterways in the Central Leeward Islands. Rainfall amounts will be enhanced due to local topographic conditions. The persistence of rainfall and already saturated soils will exacerbate flooding especially in low lying areas. The persistence of rainfall due to multiple systems will raise the likelihood of landslides in prone areas within the rainfall field and the uprooting of large trees leading to debris flows, blocked intakes and roads. Damage to low level bridges, shifting of temporary bridges and disruption to utility services is likely.

WINDS: Maria, as it approaches the Leeward Islands, will produce Category 4 winds with stronger gusts in areas of thunderstorms. Wind speeds will cause devastating damage. Damage to power lines, homes and infrastructure will occur. There remains the possibility that catastrophic damage can occur as the system strengthens in the vicinity of Dominica. Trees will be uprooted resulting in power outages, blocked roads and debris flows.
WAVES: Maximum significant wave heights of above ~11 metres are likely in open waters close to the Leeward Islands. This will result in rough sea conditions, dangerous swells and damaging waves. Damage to coastal infrastructure is likely on the eastern side of the Leeward Islands. Notwithstanding, marine conditions will deteriorate on the western side as Maria tracks into the Caribbean Sea. Marine operators should exercise extreme caution and seek to protect assets. Storm surge in the vicinity of 3-4 m can be expected in low lying sheltered coastal bays and will be exacerbated by runoff, tidal conditions and wave run up. Surge is likely to increase as Maria strengthens.

THE FOLLOWING ARE SUMMARIES OF THE NATIONAL ACTIONS UNDERTAKEN BY CDEMA PSs:

The CDEMA CU urges all members of the Regional Response Mechanism, and the public to monitor the progress of this system.

The public is advised to…